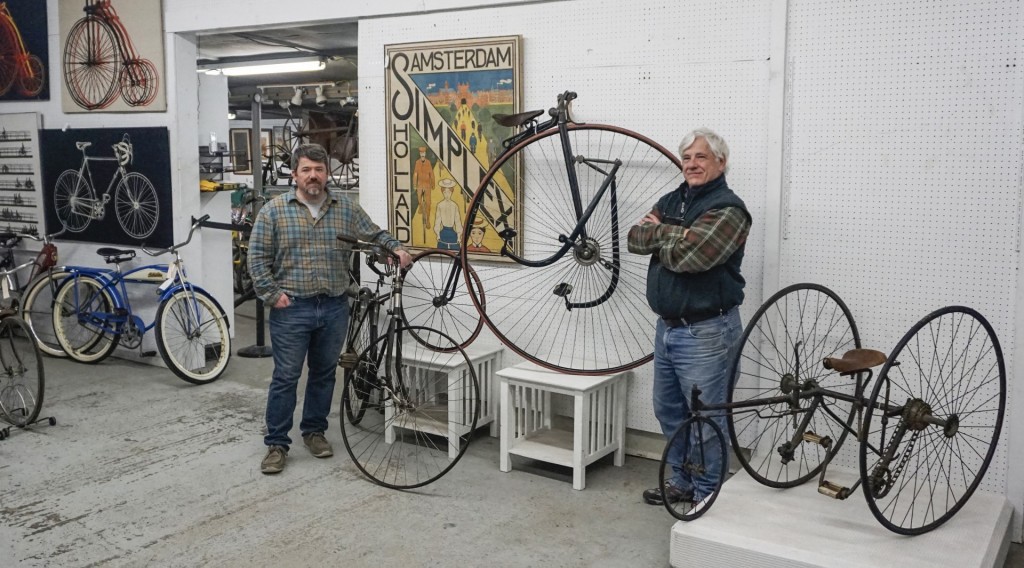 Brief History of the Bicycle 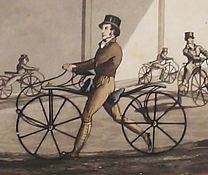 The first human powered conveyance is attributed to Baron Karl Von Drais of Germany in 1817, the vehicle became known as the “Draisin”, and later around 1819, in England it became known as the “hobbyhorse”. These early machines had no peddles and were ridden by walking or “kicking”. Although very tiring and difficult to ride this early attempt at human propulsion sparked immense public reaction. The “gentleman’s hobby” soon turned up in France and in 1819 a man named Denis Johnson started production in England. By 1820 these ill designed machines lost public appeal. In the 1820-60 period individuals worked on refining designs of their own and many unridable machines were produced throughout Europe.

There is mention of a hobby horse in the July 3, 1819 “Columbia Register” in New Haven CT., the article stating “One of these fashionable machines has lately been constructed in this city and may have seen and practiced upon..” The hobbyhorse also appeared in the same year in Troy N.Y., Boston, Saratoga, and New York City. American hobby horses with iron clad provenance are unknown, but probably exist. According to G. Donald Adams book “Collecting and Restoring Antique Bicycles”, the first lever driven machine was made in Scotland by Kirkpatrick MacMillan around 1839. In this period many unusual designs were executed including highly desirable tricycles and quadricycles. 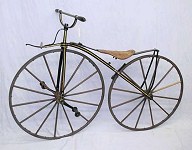 The next transition in cycling the “rotary crank” appears around 1865 and is controversial. Most scholars attribute the rotary crank to either Pierre Michaux or Pierre Lallement of Paris. These machines incorporated the crank directly to the front wheel. The boneshaker usually had a forged frame with “wagon” spoked wheels. Adams book tells us that the Frenchman Lallement appears in CT. in 1866 and together with James Carrol of New Haven obtained a patent, this was the first patent obtained for a boneshaker anywhere in the world. Soon after boneshaker manufacturers sprung up all over. Many were in the United States including Wood Bros. New York City, Pickering and Davis New York City, Hanlon Bros. New York City and Kimball CO. Boston. Just as individuals made hobbyhorses a local blacksmith or craftsman could also make the boneshakers. During this period riding schools started advertising in newspapers and broadsides were posted making the public become aware of the value of learning from expert riders of this new invention.

In 1870 the highwheel (also known as an ordinary) was patented by Englishman William Hillman and James Starley in Coventry. Known as the “Ariel” this machine had a metal frame, which curved around its high front wheel down to a smaller rear wheel and pedal driven driven directly to the front wheel. These machines were lighter and faster than they’re predecessors. The highwheel era lasted about 20 years from 1871-92 and saw many engineering developments with some very sophisticated models being made in England, France and the United States. These bicycles presented unique dangers in riding them including “headers”. These occurred when one would stop quickly and would be tossed over the handlebars, hence the term “header”. These accidents lead to the next invention, the “safety ordinary”. These models put the small tire in the front of the highwheel eliminating headers. American safety ordinaries include the Eagle and Star. In Europe smaller geared models were made including the Facile, Xtraordinary Challenge and Kangaroo. The next important development in cycling is the hard tire safety.

This machine looks similar to the bicycle as we now know it. In 1885 John Kemp Starley, nephew of James Starley introduced the Rover together with his partner William Sutton. The bicycle was now a safer vehicle to ride. Hard tire bicycles were short lived and are among the rarest bicycles. With the advent of the pneumatic tire invented by Irish veterinarian John Boyd Dunlop, bicycles with hard tires were scrapped or converted.  By 1892 the pneumatic tire was supplied by almost every manufacturer. Mounted on wooden rims these tires made bicycles lighter and the cushioning effect made riding more enjoyable.

This development during the Victorian era actually changed social habits. It was now more acceptable for a young man to ask a lady to accompany him on a Sunday ride without a chaperone. By 1892 ladies were not only being courted by young men but also by the bicycle manufacturers. Bicycling became a true craze during this period and bicycle advertising boomed. The bicycle was written about, music was composed about the bicycle and clubs sprung up all over the United States and Europe.

The League of American Wheelman (L.A.W.) was founded May 31, 1880. Delegates from 32 clubs met in Newport Rhode Island. This group was very important and a powerful political force, which lobbied for civic rights and of course better roads and maps. The present day club “The Wheelman” was patterned after the L.A.W. and formed in 1967 by Roger Johnson, Robert McNair and others. The present day wheelman collects and restores bicycles and preserves cycling history. The family oriented organization conducts meets in which members ride and display early machines. In 1884 Thomas Stevens of Colorado crossed the United States on a highwheel leaving San Francisco and arriving in Boston 105 days later. In 1971 wheelman Ed Berry Jr. used his 1886 Columbia Ordinary to duplicate the Stevens feat. Berry left San Francisco and 3400 miles later he arrived in Boston, it took him 48 days. 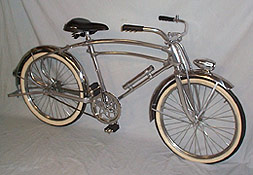 The next development in bicycles was the balloon tire. This along with early suspensions was the innovation seen in North America. The most desirable period for balloon bicycle collectors is the pre war period. These machines reach modern industrial design as art. Rare and exotic bicycles from that period include The Elgin Blue Bird, the all aluminum Monarch Silver King and the Flo-Cycle and Wingbar. These machines have reached crossover-collecting status with both modernists and bicycle collectors. Post war classics like the Schwinn Phantom, character bikes including models named after Donald Duck and Hopalong Cassidy are highly sought after. The last collectible period is the 1970’s, which include the classic muscle bikes including Schwinn banana seat Sting-Ray’s, otherwise known as krates.

In conclusion as usual in the collecting field there are several collectible sub-categories. These include racing bikes, one off oddities, military, bikes owned by famous personalities etc. The bicycle collector also looks for anything related to the field including catalogs, souvenirs, steins, pinbacks, medals, ephemera, advertising, posters etc. Almost anything with a bicycle on it or related to the bicycle can fascinate the collector. People in the field (like other collecting fields) are very passionate about collecting and preserving bicycles as objects and history. 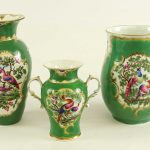