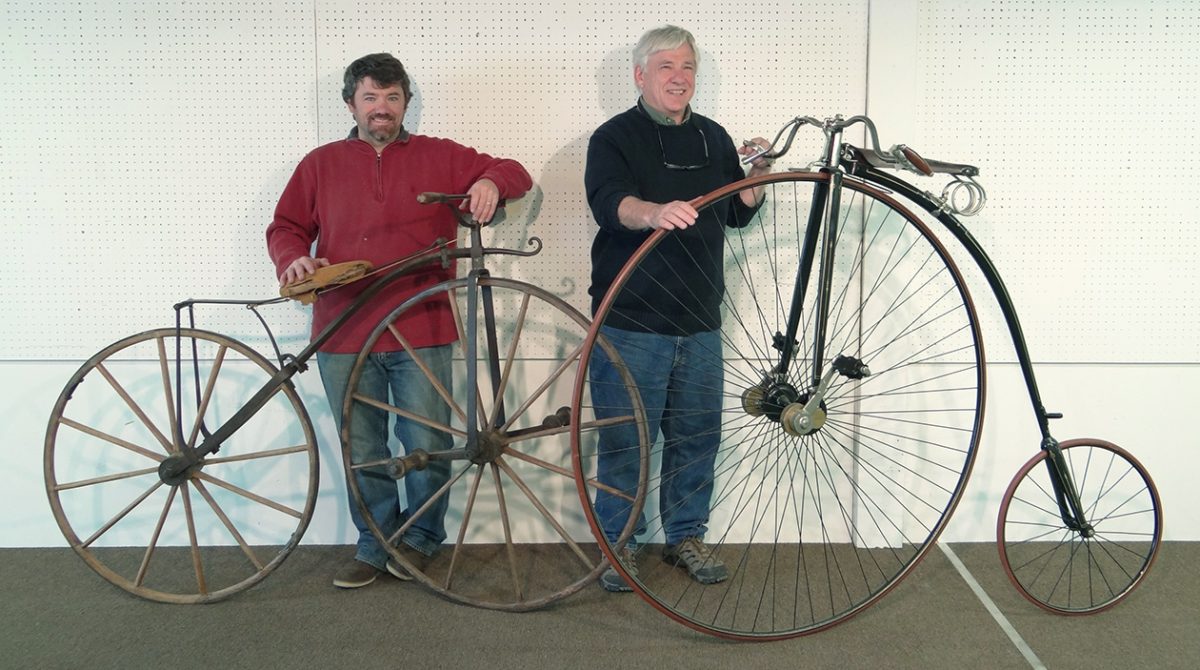 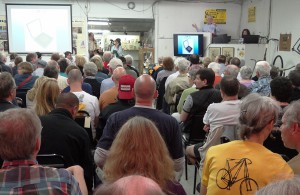 On Saturday April 21st in Copake, New York Mike and Seth Fallon of Copake Auction Inc. conducted their 21st annual bicycle auction. The sale recorded over 600 registered bidders from 36 states and 16 countries and grossed $315,000. The event started at 6:00 am the day before the auction on Friday with the annual swap meet. Vendors from all over North America and some Europeans conducted sales & trade of all things bicycle. Boneshakers and highwheels to Whizzers and lightweights, plus tons of parts, accessories and memorabilia changed hands.

Later that afternoon acclaimed author and bicycle historian David V. Herlihy presented an interactive presentation on his new book “The Lost Cyclist” about the 19th c. world traveler Frank G. Lenz from Pittsburgh, PA. Unpublished photographs taken by Lenz himself on his high-wheel tours in the US (1890-91) and on his ill-fated world tour (1892-94) were the backdrop to this both educational lecture and intriguing story of Frank Lenz. Following the presentation the Fallons and wheelman Cary Williams from Chicago hosted the second annual Ten Mile Ride. This scenic country ride attracted participants on highwheels (a.k.a. penny farthings), early velocipedes, vintage balloon tire and modern bicycles and was open to all who wished to take part. “This weekend long event fills up local motels and restaurants in the area and local residents get to witness mustached characters sometimes in period garb whizzing down Main Street Copake, New York on a highwheel bicycle. The perfect spring weather contributed to making this one of the most satisfying bicycle auction weekends to date”, Mike Fallon commented. 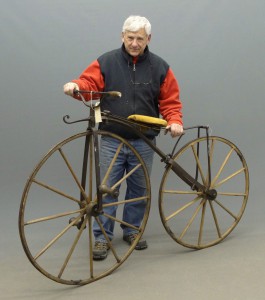 Highlights from the sale include boneshakers which represent the first pedal driven bicycle. The best of five offered brought $7,350 while others ranged from $3,950 to $4,750. Bicycles from the highwheel period (circa 1870-1890) included a concours restored 50” Springfield Roadster, manufactured in Mass. which hammered down at $12,995 and an 1889 Star Safety highwheel sold for $7,900. Other highwheel bicycles offered sold for $4k-5,650. 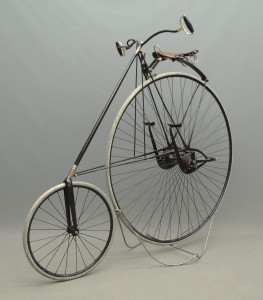 Following the highwheel bicycle or “ordinary” was what is recognized today as the standard bicycle having two equal size wheels and chain driven sprocket, deemed the “safety”. Hard tire safeties were manufactured between 1885-1895 and represent the shortest manufacturing period for early machines. An extremely rare find came to Copake consigned by an insurance company as it survived a fire. This c. 1891 Star cushion tire safety made in Smithville, NJ needing total restoration was the star lot of the sale bringing $13,900. Other hard tire models offered included a c. 1890 Columbia Light Roadster $5,870 and an 1889 Gormully & Jeffery “Rambler” $7,900. The evolution of the bicycle progressed from the hard & cushion tire to the modern pneumatic (compressed air) tire bicycle invented by Irish veterinarian John Boyd Dunlop in 1888. Dunlop’s contribution revolutionized riding and survives to this day in use on almost all bicycles manufactured. The top pneumatic safety sold ($3,600) was a scarce Columbia model 59 which instead of having a chain drive, features a “chainless” drive shaft propulsion. Other notable pneumatic bicycles include a 1899 Monark Chainless $2,025, 1893 Columbia model 32 $2,025, 1899 Spaulding chainless $4,575 and a 1915 Indian Motocycle $1,350. 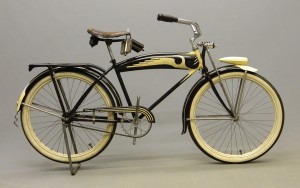 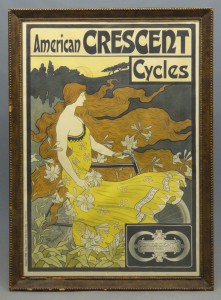 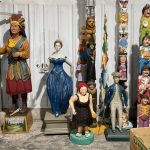